I just finished Bart Ehrman’s Misquoting Jesus. It was a pretty basic book but his main point raised some very good questions for me. His main beef about inerrancy is that it is a vacuous word. Almost all evangelicals affirm in their creeds innerancy but only in the autograph. But the problem, Ehrman rightly contends, is that we don’t have the autograph. For me, the only thing I thought was “now we have something to work towards.” The fact that we don’t have the autographs at least gave us something to do, but I never actually thought through what it meant for innerancy. And I haven’t thought through all the implications but one thing I know, inerrancy as its classically been defined has become for me a vacuous term. I can completely agree that the Bible is inerrant in its autograph but that doesn’t get me anywhere. In what sense then can we talk about the Bible as inerrant?

A while back I posted a blog entitled “Beowulf & Moses” where I compared the language evolution of Biblical Hebrew to English. However, a friend of mine wrote me an email about how this probably isn’t a proper comparison. She is a well-educated teacher and Jewish, so I thought I should listen. Here is what she said:

Anyway, about Biblical Hebrew and Old English, there is a vast difference in purpose and culture here. We believe that the Beowulf poem was written in the vernacular or vulgar tongue of the Anglo-Saxons. There you already have the melding of two people groups, cultures and languages. We also think the original poem may have been recited in Old Norse, a very similar language to modern Icelandic. Even though Britain and Iceland are two island nations, Britain’s culture and its language suffered many invasions by other European peoples, the Danes the Norse, the Norman French. Its original languages have not fared well because of this.

Several of the old languages of the Celts, most notably Cornish and Manx are no longer spoken as a first language by anyone, though that may be changing thanks to Cornish radio and TV. They are following the Welsh strategy to reintroduce the language. The only reason I know this is because I am a member of the International Reading Association and attended one of their World Congresses in July of 2002 in Edinburgh. There I met teachers from these areas who told me how they were trying to revive speaking, reading and writing in the ancient languages.

English, as Leah likes to say, is a Creole, a mixture of many languages and cultures. Because of politics and trade, the language seems to be constantly changing for the last 1,000 years. England has never had an isolated culture. According to Robin McNeill, Iceland has a very different history. It traded almost exclusively with Norse peoples for several hundred years. It also has never been invaded like England. Its language has changed very little in all that time. This point was made in a recent indie film named “Beowulf and Grendel.” The writers and producers of the film were mainly Icelandic, and in an interview I read, said they could read the old English pretty easily, unlike us.

So, the point is well taken. How much a language changes really does depend on its exposure to other cultures and languages, whether through invasion or trade. In any case, I found this information very interesting.

1. A lack of concern for our spirituality outside of the buildings we go to

This actually goes back to a post I put up a few months ago where I discussed our compartmentalization in our spiritual lives and I find that our language of “going to church” emphasizes that even more. In a sense we oftentimes believe that the place we go to worship has a more “spiritual” aspect to it, that it is more “holy” than other places.
I worked at a very small church in Virginia while I was finishing up college as the worship pastor/college pastor and it was a very sweet time. But Sarah and I were the youngest people by 10 years and that was only one other couple. Everyone else was at least 2-3 decades older than us. In any case, I was often reprimanded for hurdling the altar railing to get to the stage or for wearing my hat in the sanctuary (it was okay downstairs, but not “the sanctuary”). I was not allowed to wear shorts or t-shirts, etc. Of course I complied respectfully but I just didn’t understand at all where they were coming from.

This is what I want to warn against. When we begin to exalt a space, we forget that we are the temple of the Holy Spirit, not any building. Working with the youth group I often hear the term “you can’t do that in church!” But by saying such things, we are saying that there are things that are okay outside the church but not okay inside, as though the building somehow is where God dwells, instead of seeing that it’s within us that God dwells. We can’t get away from “the sacred space”, it is always with us because it is us. If our conscience says not to wear a hat inside a church because it’s somehow “sacred” we should never wear a hat because we ourselves are a sort of “sacred space”. Is this not what Paul means when he says (albeit in response to sexual immorality but applies here), “Do you not know that your body is a temple of the Holy Spirit, who is in you, whom you have received from God? You are not your own; you were bought with a price. Therefore honor God with your body (1 Cor 6:19-20)?Of course there are many issues that offshoot from this but my main point is that instead of bringing our idea of “church” down to the level of our daily lives, we should exalt our daily lives to the level of “church”, since that is who we are.

This is from a post I did on my church’s blog, I thought it might be thought provoking:

We have all heard it said, “The church isn’t the building but the people”. As much as we “know” that, we still have the “building” concept still embedded in our thinking. Just look at the words we use on a weekly basis.

I am going to church tomorrow.
What did you learn at church today?
Do you go to church?
What seemingly amounts to harmless semantics I think actually affects how we view our spirituality in general. By using such phrases (which shows how we really still think about things, even if on the surface we deny it) we are making it harder and harder on ourselves to not compartmentalize things. My thought is that such language breeds two things (although there is probably more):
1. A lack of concern for our spirituality outside of the buildings we go to
2. A passivity in our engaging in spirituality and our worship, especially when we gather on the weekends at our gatherings. 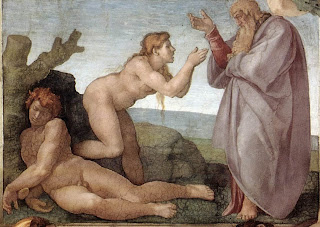 Oftentimes one reason given for the subordination of women to men is taken from the biblical text of Genesis 2:21-22 where the woman is created from a rib of Adam. So, goes the argument, since woman was taken from man she is therefore derivative and subordinate. However, Phyllis Trible in her classic work God and the Rhetoric of Sexuality has a humorous and very good argument against such reasoning. She very insightfully recognizes that the same language is used in the relationship between the man (ha-‘adam) and the ground (ha-‘adama). Man was taken from the ground (cf. Gen 3:19, 2:7).
So, even though man was taken from the ground that doesn’t mean that man is subordinate to or inferior to the ground, actually the opposite is the case. “By strict analogy, then, the line “this shall be called ‘issa [woman] because from ‘is [man] was taken this” would mean not the subordination of the woman to the man but rather superiority to him” (101). I love it!
If we wanted to take the language strictly then the woman is superior to the man. Trible does say that superiority is not at issue so she is not arguing for woman’s superiority but she does do a good job of dismantling an argument for male supremacy in this text. Bravo Phyllis, bravo. I found this very thoughtful and helpful.

Support The Bible for Normal People for just $1